Philip Foster, one of Oregon’s earliest pioneers, was a leader in the establishment of Oregon. His farm and home in Eagle Creek played an important part in the history of the Barlow Road, which followed the south side of Mt. Hood as an alternative to the treacherous Columbia River route.  Foster helped fund, build and operate the Barlow Road at various times between 1848 and 1865, guiding thousands of covered wagons into the Willamette Valley. 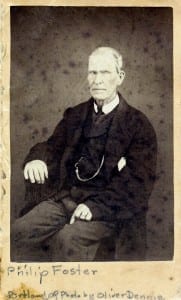 Foster took a 642.81 acre donation land claim at Eagle Creek in the late 1840′s, moving his store from Oregon City to meet the steady stream of emigrants arriving on the Barlow Road.  The Philip Foster place was a welcome sight for pioneers coming down that one last hill into the Willamette Valley and the start of a new life in the new land.

Foster managed the toll road, hiring gatekeepers and maintenance crews as needed, and kept meticulous records, including details of tolls collected and goods bought and sold, letters passed between family members, and official documents. After Philip’s death, his son Egbert continued to live on the property with his wife, Elsie Jane, until they both died in 1939, after which the property was sold out of the family, eventually becoming a relic, with barn and house rented out to separate tenants.

Local educator Betty Cody alerted philanthropist Ruth Powers to the importance of this site. Powers funded the purchase and initial repairs, turning it over to the Jacknife-Zion-Horseheaven Historical Society to manage and maintain. JZH opened it to the public in 1993, for the sesquicentennial of the Oregon Trail.

Since 1993, the Farm has been funded by memberships, tours, admissions, donations, store sales, and private and public grants, and is supported by a small army of volunteers and a dedicated board of directors.